Can I measure fault loop impedance via an RCD without the RCD tripping?

First of all the following information in advance:

Measurement of fault loop impedance ZL-PE and ascertainment of short-circuit current IK based on measurement results is conducted in order to determine whether or not the shutdown conditions for the circuit breaker are fulfilled in the event of a phase-to-earth fault. Electrical continuity testing must be completed before measuring fault loop impedance. In accordance with DIN VDE 0100-600, measurement of loop impedance ZL-PE is not required in circuits which are protected by RCDs, because the circuit breaker is not tripped in the case of a phase-to-earth fault, but rather the RCD, for whose low tripping current fault loop impedance is always deemed to be fulfilled. The RCD must always be checked for correct functioning, and line impedance ZL-N must of course be tested. See page 48 in the "Electrician’s Notebook (part 1)" in this regard, for example.

Nevertheless, many people would like to be able to measure fault loop impedance despite the presence of an RCD in order to indirectly verify the low impedance connection of the PE conductor, since this is part of the loop (quality of the system). The idea is to do without a separate low-impedance measurement RLO (somewhat more complex due to the additional cable which has to be laid to the PA). Note: Measuring fault loop impedance does not eliminate the need to measure low impedance continuity!

There are three metrological possibilities to this end:

For the purpose of loop impedance measurement, L-PE voltage is only loaded with low AC current of less than the RCD’s tripping threshold – typically 15 mA. Loop impedance L-PE is then calculated on the basis of the resultant voltage drop △U and △I = 15 mA. With an impedance of 1 Ω, for example, voltage drop would be just 15 mV and since most test instruments are operated in the 600 V measuring range, it’s plainly apparent that such small voltage changes cannot be measured accurately – especially since line voltage can fluctuate even during the short measuring period of just a few grid periods. And thus this measuring method provides sufficiently accurate measured values at impedances of less than 10 Ω (see the test instrument’s technical data), corresponding to short-circuit current IK of no more than 23 A (where UN = 230 V). This would still be sufficient for a circuit-breaker with tripping characteristic B and a rated current of max. 4 A, i.e. practically only in the case of overcurrent protection devices for individual loads such as protective motor switches. 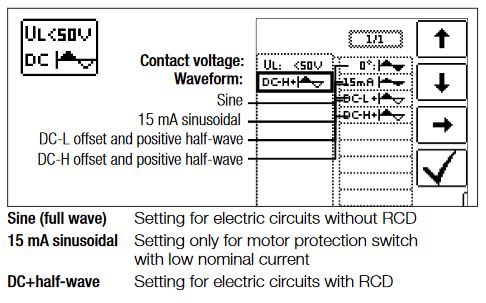 Although the test instruments also display measured values for ZL-PE of less than 10 Ω and resultant IK values of up to several hundred amperes with this measuring method, these are only informative. This it also made apparent by the fact that greatly fluctuating measured values are obtained for multiple measurements conducted on the same test object. Furthermore, the minimum measuring current of 200 mA specified in the standard for low-impedance measurement RLO would not be complied with.

The usual RCD (type A or F) is first of all brought to saturation magnetically by means of a direct current, so that sufficiently accurate measurement can then be performed – even for low impedances – with the high measuring current of a several amperes (with half-waves of identical polarity) without tripping the RCD (although this cannot be guaranteed). An N conductor must also be connected to the test instrument for this measurement.

Of course this trick doesn’t work with AC/DC sensitive RCDs (types B and B+).

In this case, only option three remains!

3. Bridge the RCDs for the Duration of the Measurement

Caution: All protective measures are rendered inoperative while the RCDs are bridged!