Test instrument usage can be described in general as follows: Measuring devices or measuring instruments are used to determine geometric or physical quantities. During the course of the respective measurement, they usually provide a quantitative statement concerning the quantity to be measured by means of a scale or a numeric display. This statement, i.e. the measured value, is specified as the product of a numerical value and a unit of measure. The measuring methods which are used as a fundamental basis are specified under Measuring Technology. General features of measuring instruments in accordance with DIN 1319-1 are listed under Measuring Equipment. In place of a readable display, a measuring instrument might also generate a signal (in most cases an electrical signal), or it may store data either electronically or on paper (e.g. as a recording instrument or module).

Measuring instruments for the performance of measurements generally belong to the measuring equipment category. If they’re used for testing, they’re also referred to as test equipment according to DIN 1319-2.

Above and beyond these requirements which remain valid for measuring instruments, changes in the relevant regulations have led to the development of test instrument features and characteristics which alter routine daily use, permit adaptation to existing standards and regulations, and contribute to simplified user operation.

Automatic test sequences and graphic displays have also been introduced in addition to the use of intuitive operating concepts. It must be possible for users to operate test instruments of the most recent generation without having to refer to comprehensive documentation.

Nor can the influence of new developments within the market be denied where appearance is concerned. Today’s test instruments are more compact and lighter, rugged and ideally adapted to their respective applications to the greatest possible extent. Whereas metal housings were used in the past, plastic has now asserted itself in the field of test instruments. 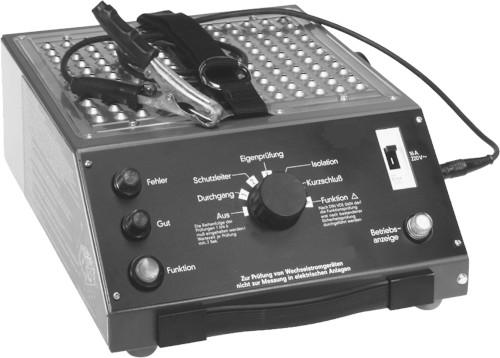 Nothing has a greater influence on the development of new test instruments than changes to standards and regulations. If new test procedures are required or if limit values have changed, it’s usually necessary to adapt the associated test instruments.

New standards have been taken into account again and again in recent years in the development of test instruments and test software.

For example in the field of electrical safety, the test instrument landscape changed significantly upon introduction of IEC 62353.

The design of technical medical devices must fulfill the requirements of harmonized standard 60601 as specified by the IEC and adopted by all IEC member countries. This standard defines all criteria for the production of products which are deemed electrically and mechanically safe, and which reduce the risk of damage in such a way that patients as well as operators cannot be placed at risk. All tests for the electrical safety of electrical medical devices can be broken down into two categories:

In the past, parts of this standard have also been used for periodic testing during the equipment’s intended duration of use.

The goal of IEC 62353 is to provide a uniform standard in order to ensure safe procedures, and to reduce the complexity of tests in accordance with IEC 60601-1. All tests are based on testing in accordance with IEC 60601, but numerous aspects have been eliminated to improve safety and functionality. Whereas devices under test were subjected to destructive testing in the past, this is no longer necessary today. Protective conductor test current has been reduced from 25 A per IEC 60601 to a value within a range of 200 mA to 1 A per IEC 62353. As a result, the respective test instruments can be made smaller and more compact.

Whereas alphanumeric displays were standard equipment in older test instruments, today’s multifunctional test instruments necessitate the use of graphic displays. Help screens are included more and more frequently for the performance of a wide variety of different tests. These makes it possible for the user to double check the test setup. 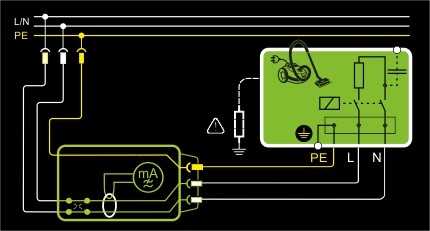 It’s quick and easy to determine whether or not the device under test has been correctly connected. Alphanumeric displays are not suitable for displaying this more complex information. Where programming is concerned, representation of display content constitutes the main difference between the two types of display.

Where programming is concerned, representation of display content constitutes the main difference between the two types of display.

For example, LCD controller memory for alphanumeric displays contains ASCII codes for the individual characters from a fixed character set. Advantage: only one byte needs to be written to the corresponding memory cell in order to read out a character. However, no graphic representations are possible other than the usually fixed character set. The appearance of the characters cannot be changed and it’s not possible to select text attributes such as size, boldface and italics.

In contrast, graphic-capable displays have an image memory in which every single pixel is represented. The advantages are obvious. Any desired graphics such as images and logos can be displayed. Reading out highly legible proportional fonts, or even text with different attributes, is no problem. On the other hand, this also means that text and graphic elements are transferred to display memory as pixel representations, which requires more complex software and more computing operations.

Today’s test instruments are equipped with graphic-capable color displays. This permits the additional use of various colors for the display of processes and measurement results. Simple, more intuitive operation is thus made possible for the user. The incentive for using color graphic displays for visualization is the ever-increasing demand for ease of use – measurement data can be graphically presented and the measuring sequence can be displayed.

Equipping the display with a touchscreen provides the test instrument with an intuitive user interface. The advantage of a touchscreen display is the ability to create ergonomic, easy-to-use user interfaces that can be easily adapted with the help of software when the application changes, without the need for complex and expensive hardware modifications which incur additional costs.

The use of touch glass makes it necessary to convert the coordinate values read out there into the pixel coordinates of the underlying display. Many touch functions also require a simple time base in order to distinguish between time before and after the screen is touched (e.g. when pressing a “button”). The operating elements are shown on the display, so there’s a close correlation between the functions for the display and the touch glass. 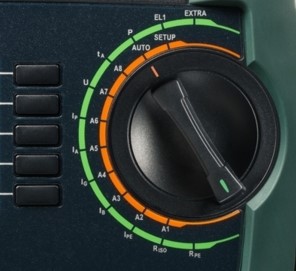 A touchscreen is a combined input/output device in which the program sequence of a technical device can be directly controlled by touching parts of an image. The technical details of the command input are invisible to the user, thus creating the impression that the test instrument is controlled directly by pointing his finger. The image, which is rendered touch-sensitive by the touchpad (on top or underneath), can be generated in different ways.

Instead of controlling the mouse pointer with the help of a mouse or any similar device, a finger or a stylus pen can be used. Tapping briefly on the screen is analogous to a mouse click. Drag and drop operations can be executed by dragging one’s finger or stylus across the touchscreen. Some systems can process two or more simultaneous touches which serve as commands (multi-touch), for example in order to rotate or scale displayed elements. The term multi-touch is usually also used in connection with the ability of the system to recognize gestures (e.g. swiping).

"Test instruments should be so easy to use that no operating instructions are require" – in the meantime this is a very common demand and intuitive operating concepts are being introduced more and more frequently for new test instruments.

Reading a user manual would have little or nothing to do with intuitive interaction. No instructions should be necessary for the basic functions. In particular for test instruments of the most recent generation – which offer a multitude of functions – operation is inevitably becoming more and more complex. As complexity increases, it becomes more and more difficult to lay out the overall system such that all of its functions can be used intuitively.

Ergonomic user interfaces, context menus, intelligent wizards and even interactive help are also taken advantage of in order to promote intuitive operation of measuring and test instruments. Unfortunately, the functionality of a test instrument is frequently not immediately apparent to its user, so that reading the instructions and the associated learning curve are unavoidable. But examples are already available which demonstrate how operating concepts and control elements can be enhanced to support intuitive operation.

The presentation of all possible functions at a graphic display combined with a touch-sensitive panel, in color and united with simple and self-explanatory operation, is the targeted goal of the latest developments for test instruments.

Tests in accordance with existing standards and regulations usually follow the same pattern over and over again. The individual steps are lined up one after the other and worked through by the user. This task is made easier by automated test sequences which the user can set up himself with the help of a sequence editor, or which can be selected from existing test sequences stored at the device. 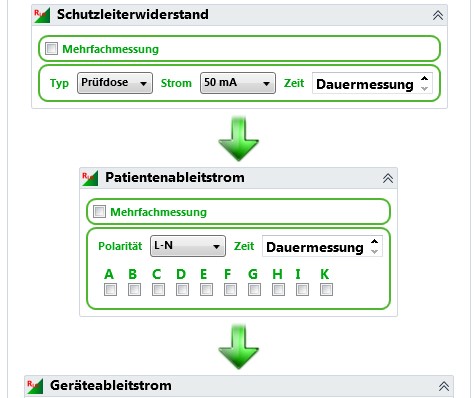 Test steps can be sequenced easily and conveniently by means of drag and drop, transferred from the PC to the tester and saved as a separate sequence.

Where top-quality test instruments are concerned, e.g. for testing HF generators used in electrosurgery, even complex test sequences with up to 150 test steps are combined with user instructions or automatically executed sub-steps. These instruments make it possible to automatically evaluate test results for compliance with standard tolerances. Legally required test reports are then of course automatically generated on the basis of these results and made available for printing or saving. The test values are transferred automatically, or if desired manually, to existing equipment management software. The software issues reminders for pending test deadlines.

The growth of microbes on surfaces is usually an undesirable effect. The colonization of surfaces with microorganisms constitutes a hygiene risk (e.g. in hospitals and public facilities), impairs the performance of surfaces (e.g. due to corrosion) and may result in dangerous spoilage of food. Infections play a special role in the field of healthcare. Infections which delay healing or are life-threatening can be caused in hospitals by pathogenic microorganisms which increasingly demonstrate significantly reduced responsiveness to antibiotics (nosocomial infections). Approximately 1.75 million patients suffering from severe nosocomial infections are expected each year in Europe.

As a result, great significance is attributed to the prevention of infections which might be spread in hospitals. The availability of inexpensive materials with powerful antimicrobial efficacy is becoming increasingly important within this context.

Substances which create a hostile environment for microorganisms, even on surfaces, are continuously being further developed and made more readily available. Initial test instruments with antimicrobial or antibacterial properties were introduced at the end of 2015 for use in the healthcare, pharmaceuticals and food industries.

In general, differentiation is made amongst passive materials on which microbial colonization is prevented alone by the surface structure.

In contrast, active antimicrobial materials contain biocidal components which attack microorganisms at the cell wall, or in their metabolism or genome. 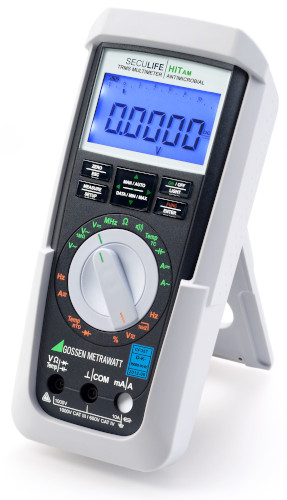 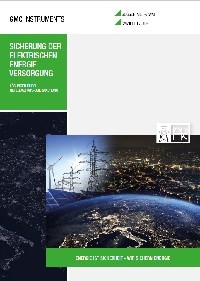