Safety and functions diagnosis for vehicles with electric or semielectric drives

Today’s high-voltage systems in hybrid and electric vehicles (passenger cars) are supplied by energy storage units with up to 500 V. Voltage levels are expected to increase by a factor of roughly two in the future. Commercial vehicles are already using technologies with operating voltages of up to 1000 V.

However, only voltage values of less than 60 V DC and 30 V AC are considered safe where electrical hazards to human health and life are concerned. Due to the fact that voltages occurring in electric vehicle systems are far above these safety limits, extensive hazard analyses have been conducted in recent years. Amongst other things, the EU has issued directives which are binding for the manufacturers, who in turn have prepared operating and work instructions in order to eliminate, to the greatest possible extent, hazards due to electrical energy during use, as well as during production, development, maintenance and repair.

Dangers for users and inspectors

The hazards involved with the use of electrical equipment and systems always result from dangers associated with the flow of electric current through the body, electric arcs, electromagnetic interference and static electrical charges. Other potential, but nevertheless avoidable hazards can be caused by improperly executed electrical work performed on the vehicle by inadequately qualified personnel, as well as technical defects in the vehicle.

According to the VDE (German Association for Electrical, Electronic & Information Technologies), an alternating voltage of 50 V or a direct voltage of 120 V is already deemed a life threatening touch voltage for healthy adults. Technical rules for safety during operation of electrical systems, published by the German Federal Office for Occupational Safety and Health (BAUA), specify maximum values of 25 V AC and 60 V DC. 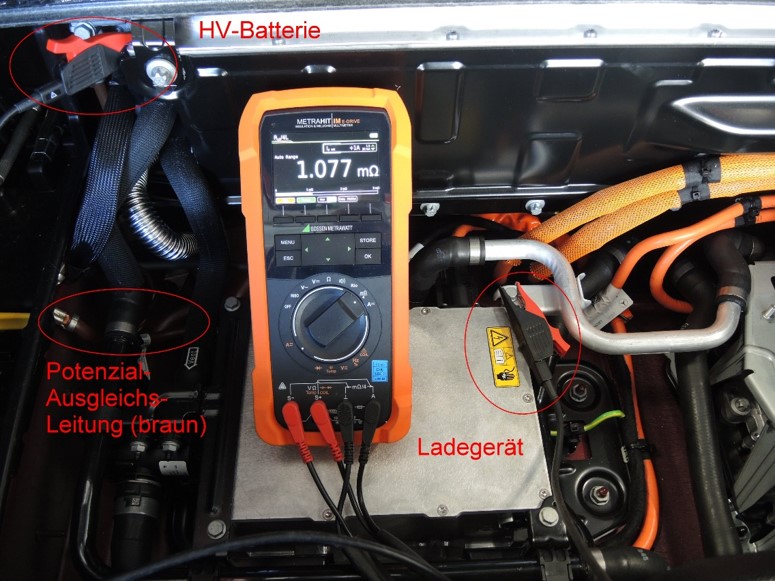 Electrical hazards due to high-voltage systems in motor vehicles

A certain amount of residual risk remains for personnel who work on hybrid and electric vehicles in research, development, production and service. Although extremely high levels of intrinsic vehicle safety are required by the legal guidelines and are achieved by means of technical design measures implemented by the vehicle manufacturers, this residual risk cannot be entirely eliminated, even with all due care (above-mentioned example of household appliances).

Touching high-voltage components which are energized due to an internal fault can conceivably cause current to flow through the human body. Even in the case of direct current as of roughly 30 to 50 mA, the respiratory musculature may be subject to contraction if contact is made in proximity to the ribcage, resulting in respiratory standstill for a long as current flows. Alternating current at 50 Hz can cause ventricular fibrillation or even cardiac arrest with a current of only 10 mA and an exposure time of greater than 2 seconds.

Which electrical hazards need to be taken into consideration where hybrid and electric vehicles are concerned?

Strictly electric vehicles use only electrical energy for drive power. The required energy is either stored within the vehicle, for example in a rechargeable battery, or fed from an external source as needed, for example with the help of an overhead contact line or contact rail, or by means of induction. Less frequently, electrical energy is also generated on board the electric vehicle.

Hybrid vehicles are equipped with two different drive systems, each with its own energy storage system. As a rule, this involves an electric drive (electric motor with high-voltage battery) in addition to the conventional drive system (internal combustion engine with associated fuel tank). Differentiation is made amongst plug-in, mild and micro hybrid vehicles.