The International Electrotechnical Commission (IEC) is an international standards organization based in Geneva that prepares and publishes standards in the fields of electrical engineering and electronics.

As an association under Swiss law, the IEC is a non-profit, non-governmental organization. In addition to the IEC’s head office in Geneva, there are four regional centers as well: in Singapore for Asia, in Brazil for Latin America, in the USA for North America and in Sydney for the Pacific region.

The IEC was founded in 1906 and was initially located in London, but has been based in Geneva since 1948. The IEC was instrumental in harmonizing standards for units of measure, in particular Gauss, Hertz and Weber. The IEC was also the first to propose a system of standards, namely the Giovanni Giorgi system, which eventually became the International System of Units (SI). A multilingual, international dictionary was published in 1938 in order to standardize electrotechnical terminology. This work continues and the International Electrotechnical Dictionary (IEV) remains an important project in the electrical and electronics industry.

The IEC’s charter covers the entire spectrum of electrotechnology, including power conversion and distribution, electronics, magnetism and electromagnetism, electroacoustics, multimedia, telecommunications and medical technology, as well as general disciplines such as vocabulary and symbols, electromagnetic compatibility, metrology and operating performance, reliability, design and development, safety and the environment.

The IEC consists of members known as national committees (NCs). Each NC represents its own national, electrotechnical interests within the IEC covering manufacturers, utilities, distributors and suppliers, consumers and users, government agencies at all levels, professional and trade associations, as well as developers of national standards bodies. Roughly 90% of the employees who prepare IEC standards work in industry.

More than 80 countries are represented by the IEC, organized into 1442 workgroups and commissions. 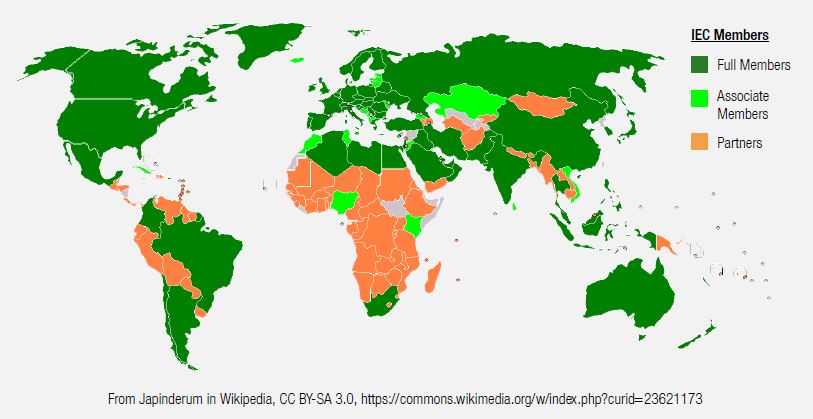 Part 1 of IEC 62368 is a product safety standard which classifies energy sources, stipulates protective measures for energy sources and provides guidelines for their use. The specified safety precautions are designed to reduce the likelihood of pain, injury and, in the event of fire, property damage.

IEC 62368-1 applies to electrical and electronic equipment in the fields of audio, video, information and telecommunications technology, including electric office machines up to a nominal voltage of 600 V. The standard also applies to components and assemblies intended for integration into such equipment.

In contrast to DIN EN 60950-1 (VDE 0805-1) and DIN EN 60065 (VDE 0860), DIN EN 62368-1 (VDE 0868-1) has been entirely restructured and adopts a new safety approach. This new approach is based on the premise that damage can occur when energy of sufficient magnitude and duration acts upon a body. Taking the risk of danger posed by possible energy sources into account is paramount to safe equipment design.