Storage batteries are becoming increasingly important in terms of power supply security. However, they’ve been in use for many decades, especially – although not only – in the field of emergency power supply. But batteries are subject to irreversible, unavoidable aging processes during the course of time, which result in reduced available capacity. In order to ensure the availability of a stationary battery system’s rated capacity, periodic testing and well-organized maintenance are necessary. The goal is to ascertain the battery’s current condition and to pinpoint aged blocks before major damage occurs, thus impairing battery capacity.

The term "battery" is derived from military parlance where it designates an assembly of several guns. Analogously, the term was adopted to describe an aggregate of several electrically connected galvanic cells. As of the second half of the 20th century, use of the term "battery" was also extended to include individual primary or secondary cells, although the term "accumulator cell" or "rechargeable battery" is more commonly used for the latter. The aforementioned shift in linguistic usage was addressed in DIN standard 40729, Accumulators; galvanic secondary cells; general terms and definitions, which defines a battery as "several connected cells", but this differentiation in terminology has become blurred in everyday usage.1

Appliance batteries are used to power small, mostly portable devices like watches, radios, toys, flashlights and the like, as well as permanently installed appliances such as smoke detectors. Standard designs are used in most cases.

Device batteries must be compact, suitable for use in any orientation, lightweight and yet mechanically robust. They mustn’t leak or outgas during normal storage and use in the respective device. They’re commercially available in numerous variants based on zinc-carbon or alkaline-manganese materials. Availability of zinc-carbon batteries has been decreasing since the 2000s, and they’re hardly manufactured at all anymore. 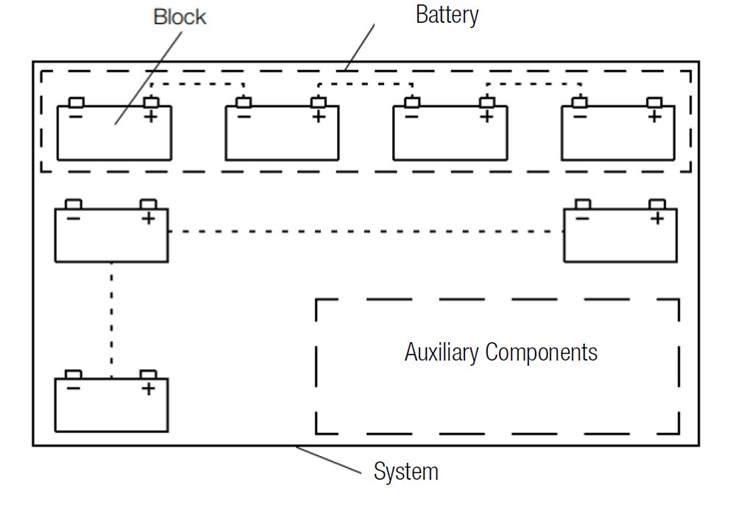 All voltage values of the individual battery blocks within a battery system are recorded, often at mid-range intervals (inspection every 3 months).

Block voltage values are recorded several times to this end, for example during a controlled discharge process. At least two test runs must be completed.

In addition to measured values for block voltage (see FLOAT VOLTAGE), the associated internal resistance values of the battery blocks are also logged.

oltage and current curves during charging and discharging can be recorded at freely definable time intervals.

Measurement of voltage drop across the connectors – also during discharge

The use of cookies enables us to provide the visitors of this website with user-friendly services. By using our services or visiting our website without changing the cookie settings in your browser you declare your consent with the fact that we apply cookies. Please refer to our Privacy Statement for further information.